October Students of the Month 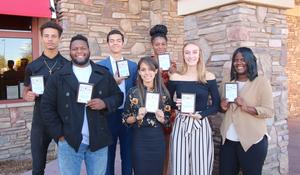 Students from our four comprehensive high schools and one alternative school were recognized as a Student of the Month.

Sponsors of the Student of the Month Program donated backpacks filled with gifts, gift certificates, a plaque, and much more. The students had an opportunity to thank their families and teachers who have supported them and helped them plan their future life goals.

Matito Shivers was chosen as Hemet High’s Student of the Month for his compassionate and selfless nature. Staff said he is wise beyond his years, goes above and beyond for others, and always has a kind word to give for someone in need. Matito plays football, is a member of the track team, and President of the Men of Excellence group on campus. After high school he plans to join the military and play football. He hopes that joining the Naval Academy will allow him to help more people.

Jordan Hubbell was chosen as West Valley High School’s Student of the Month. Jordan was nominated by her math teacher, Dana Gonzalez, for her poise and work in helping create a positive school culture at West Valley. Jordan currently has a 4.29 GPA and is a member of the school’s Varsity Volleyball team, is a Children’s Ministry Worker, Vacation Bible School Leader, and AP Calculus Tutor. After high school, Jordan plans on attending college to receive her teaching credential and coming back to West Valley to become a math teacher.

Estaban Garibay Paredes was selected as Tahquitz High School’s Student of the Month. Esteban was nominated by his English teacher, Ms. Otis for his work ethic and always looking for ways in which he can improve. Estaban came to Tahquitz last year and he did not speak any English. Due to his perseverance he is now fluent in English and applies that same work ethic to his other classes. He currently has a 3.47 GPA and plans to attend a four-year university in the United States to become an engineer.

Paulina Galindo was selected by her Art teacher, Mr. Riegle, as Hamilton High School’s Student of the Month. Mr. Riegle said he nominated Paulina for being a true leader on the Hamilton High campus. Paulina is currently a member of California Scholarship Federation (CSF), ASB, Interact, and is an active participant in the Beautification Project on campus. Paulina hopes to attend University of California, Los Angeles, to major in computer science and become a software engineer. She hopes this career will allow her to not just live in the future, but “be a part of creating the future.”

Tyrisha Green was nominated by her Advisory teacher, Frances Garrison, as Alessandro High School’s Student of the Month. Ms. Garrison nominated Tyrisha for being a model student since she arrived at Alessandro and for her positive and enthusiastic personality. Garrison joked that Tyrisha seems like more of a colleague than a student. Tyrisha said she tries to be a role model for those around her, especially her siblings. She plans to attend Mt. San Jacinto College next year to continue her education.

Congratulations to the students, teachers, principals, and family members. It was an inspiring morning celebrating these students and their bright futures.