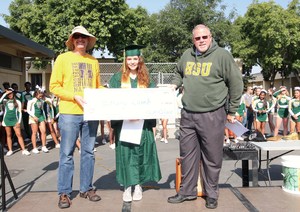 Winchester staff announced Bethany Lamb as a recipient for the No Excuse University/AVID scholarship.

Winchester Elementary School staff is always looking for new ways to encourage their students to think about their future. Principal Mark Delano believes that it is never too early to have students thinking about college and career pathways.

Winchester students and staff are part of the No Excuse University (NEU), a network that believes that all students can achieve and succeed when the “Six Exceptional Systems” is implemented. Staff have implemented all areas of these systems: Culture of Universal Achievement, Collaboration, Standards Alignment, Assessment, Data Management, and Intervention so all of the students on campus are being supported. In addition to these systems, the belief of NEU aligns with Hemet Unified’s goal of ensuring all students graduate college and/or career ready.

In addition to the NEU network, staff has created a NEU/AVID scholarship for former Winchester Elementary students. For the past seven years, staff has a “Coins for College” drive where students donate change on a yearly basis, along with other small fundraisers throughout the year. Students from Winchester’s two feeder high schools, Tahquitz High School and West Valley High School, apply for the NEU scholarship. A committee reviews all of the student applications and chooses two deserving students. At a Flag Friday ceremony, Christina Muoio from West Valley and Bethany Lamb from Tahquitz were announced as the NEU/AVID Scholarship winners.

Bethany Lamb told students that she attended Winchester Elementary from first through fifth grade. During third grade she was introduced into a field of study that she will pursue when she attends California State University, Fullerton in the fall; she read a book about marine life and knew that is where her passion lay. With her degree she plans to start a career at a marine mammal center. She said during her collegiate career and beyond she will live by the motto, “No Excuses”. Living a life with no excuses means to live a life of hard work and dedication and she knows with this attitude she will be able to succeed.

Christina Muoio spoke to the students about her time at Winchester Elementary and how it helped her throughout her educational career. She shared about her time in fourth grade and how the prospect of college was introduced to her. Her class was given the task of researching the educational levels of their parents. This project opened her eyes because she realized neither of her parents had attended a 4-year college, and promised herself as she sat in her wooden desk that she would be the first in her family to do so. She is now graduating from West Valley and will be attending University of California, Santa Barbara to major in English. She said despite adversity she lived by the motto of “No Excuse” and challenged herself to move forward. She finished her speech by saying, “Thank you Winchester, for my love of reading, my ability to dream of a successful future, and my perseverance. Thank you for everything!”

Principal Delano got back on stage after the two NEU recipients spoke and said, “This is what graduation means.” He spoke of the adversity each student will face, but to remember the “No Excuse” motto to carry on to reach your goal. In addition to the $500 NEU/AVID Scholarship Bethany and Christina received, staff provided a $100 scholarship to Malik Lofton from West Valley, Esmeralda Penalver from West Valley, and Rhyan Massie from Tahquitz.

Thank you to the Winchester staff for creating an event that celebrates the determination and perseverance of students. Thank you to Mary Tryon, Gayle Mondt, and Christine Fuller for reviewing all of the applications and congratulations to Bethany, Christina, Malik, Esmeralda, and Rhyan on your bright futures!