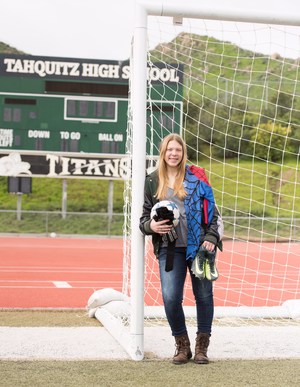 Kaylee Westmoreland beats a CIF record that has been in place for two decades.

Another season of high school sports has come and gone and what a remarkable season it was. A Tahquitz High School soccer player beat a 21-year CIF Southern Section record in Girls’ Soccer. Tahquitz’s goalkeeper, Kaylee Westmoreland, not only beat the record, but shattered it. Kari Bates, the previous record holder had 749 saves in 1992-1996; Westmoreland finished with 846 saves.

Kaylee said she has played soccer since she was five years old. Her parents signed her up for many sports through Valley Wide, but she loved soccer the most and kept with it. In her freshman year at Tahquitz, she set a single season record for most goals saved. She admits that the idea of actually breaking the record for career saves did not come until her junior year.

Kaylee said soccer pushed her to do better in school. “In my mind I knew there was a chance I could play in college, and I would have a better chance if I had really good grades,” said Kaylee. Kaylee currently holds a 4.35 GPA and the Air Force Academy, Baylor University, University of San Diego, Cornell University, Old Dominion University, Niagara University, and California Polytechnic State University, San Luis Obispo have all expressed interest in having her play for their schools.

Kaylee said she wouldn’t have gotten this far if it wasn’t for her parents. She said her dad helped with her soccer aspirations and her mom helped with her academic aspirations. She said they always taught her to do her best and no matter what happens to push herself forward. She said she is nervous about moving away from her family, but understands that “college is about gaining more experiences and traveling without the comfort or influence of your family.”

Kaylee plans on majoring in Mechanical Engineering to become an aeronautical engineer and design fighter jets. However, she hopes to keep soccer in the mix throughout her life. She said she would love to play soccer professionally, but if she does not get the opportunity, she will play in some capacity. She encourages girls who may be skeptical of playing soccer to try it, and for those that are already involved to stick with it. She admits that it can be challenging, but said it’s worth it.

Congratulations Kaylee for an amazing soccer and academic career at Tahquitz High School! We wish you the best of luck and know you will represent Hemet wonderfully wherever you decide to go.