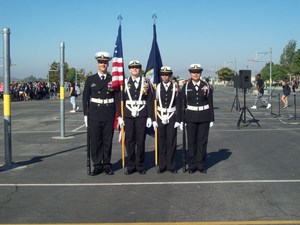 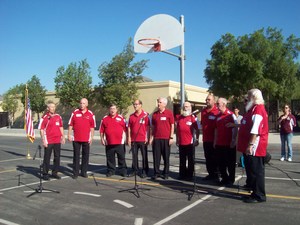 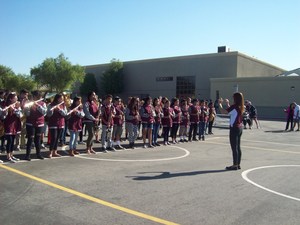 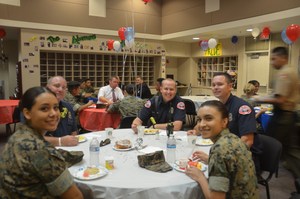 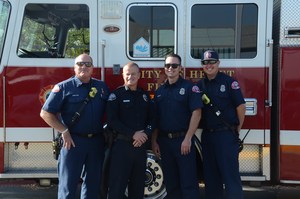 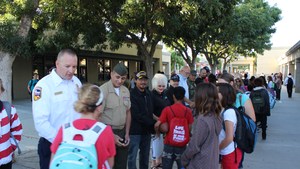 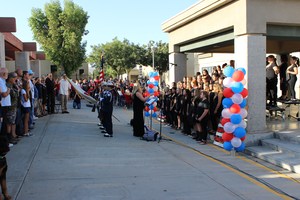 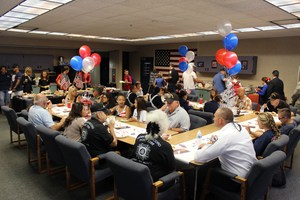 Fifteen years ago, our nation was stunned as we witnessed the attack of our nation on September 11th. Many of the students within Hemet Unified School District were not alive at this time, or are too young to remember that terrible day. Many schools spent Friday, September 9, as a remembrance to the great sacrifices our First Responders made and the many lives that were tragically lost.

Tahquitz High School’s JROTC instructor Major Williams invited local First Responders to Tahquitz to thank them for their service. As students, staff, and First Responders walked onto campus they were greeted by JROTC cadets holding signs and presenting the colors. Police Officers, retired veterans, and Fire Rescue Officers were served breakfast and were given an opportunity to speak to the JROTC cadets about their careers. Major Williams thanked First Responders for their service and said, “We will never forget those who gave it all on that day.” Thank you to Hemet Police Chief Brown, Sergeant Miller, Officer McGinnis, Officer Stehli, Hemet Fire Captain Kurt Havlick, Engineer Patrick Brown, Firefighter Dan Billington, Engineer Chris Galleta, and retired first class US Navy Eric Weckesser for attending.

Dartmouth Middle School held its fourth annual 9/11 Remembrance event for local First Responders and Military Personnel. This year over 35 special guests attended the event. First Responders and Military Personnel greeted students and shook their hands as they walked onto campus. Hemet High School’s JROTC conducted the presentation of colors for the special guests, and they were served breakfast by Dartmouth. “The ceremony unites the school with our community, providing necessary time to reflect on those who provide us with safety and security,” said Principal Jennifer Martin.

Diamond Valley Middle School dedicated its first Flag Friday of the year to a remembrance of September 11th victims and First Responders. This is the third year Diamond Valley has had a 9/11 remembrance event, and thanks to the collaborative efforts of Sandra Turner, Dustin Drake, Stacy Ciampa, Melissa Torres, and the ASB and band students it exceeded prior year’s events. West Valley High School’s Navy JROTC did the presentation of colors as everyone stood to say the Pledge of Allegiance. The Hemet Harmonizers were also in attendance and sang the National Anthem for the students and staff. “I was truly touched by our students and their respectfulness during the event, and the number of community members that were able to come.” Thank you to the Hemet Harmonizers, Hemet Fire Department Station 2, Navy Veterans Grace David and Pauline Costas, WWII Navy Veteran Bill Harrison, retired Hemet Teacher Stacey Bailey, and former Hemet Mayor Lori Van Arsdale for attending.

Thank you to all of the school staff that took a moment to teach students about this tragic day in our nation’s history. We will always remember the sacrifices our First Responders made and continue to make.